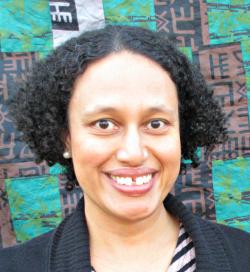 An associate professor in the History Department at the University of Texas at Austin and a faculty affiliate in Population Health at Dell Medical School. She is an historian of medicine and science who focuses on cases in African societies. Her first book, Bitter Roots: The Search for Healing Plants in Africa (University of Chicago Press, 2014) is a study of six plants which scientists in Ghana, South Africa, Madagascar and other countries sought to transform into new pharmaceuticals. It received the 2015 Melville J. Herskovits Prize in African Studies. She is completing a new book, Atomic Junction: Nuclear Power in Africa after Independence which is under contract with Cambridge University Press. This study examines the history of Ghana’s nuclear program since the 1960s and the role of Ghanaian scientists in extending radiation protection services.